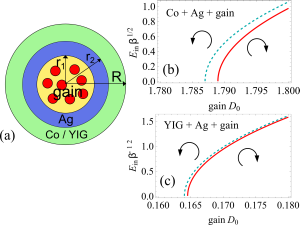 Recent discoveries in quantum nanoplasmonics have raised high hopes for the future development of ultrafast and super small optoelectronic devices. Nanoplasmonic applications utilize plasmons – oscillations of free electrons in metals – to achieve high concentration of the electromagnetic energy at a subwavelength volume. One of the most striking developments in nanoplasmonics has been a theoretical prediction and experimental implementation of the SPASER (Surface Plasmon Amplification by Stimulated Emission of Radiation). Similar to a laser that radiate coherent photons, the spaser generates stimulated emission of coherent surface plasmons in resonating metallic nanoparticles.

In order to be able to use spasers, one must understand their behavior in the external electromagnetic field. Since the spaser is a nonlinear system, its interaction with the external field is very nontrivial. Currently, investigating different aspects of physics of spasers is one of my main areas of interest. This include synchronization of spasers with an external electromagnetic wave, collective behavior of systems of spasers, a possibility of loss compensation by spasers, and creating new types of spasers such as the channel and magneto-optical spasers. I am also interested in studying the light propagation and localization in resonant photonic crystals, optics of magneto-photonic crystals, as well as the general theory of localization.