Education is an admirable thing, but it is well to remember from time to time that nothing that is worth knowing can be taught. 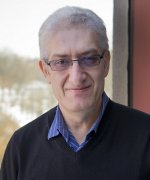 Prof. Deych research is currently focused on properties and applications of optical Whispering Gallery Modes. These modes arise when light is confined within an axially symmetric optical resonator. Examples of such resonators are dielectric spheres or toroids. Light propagating along an equator of such a structure almost tangentially to its surface is prevented from escaping from the resonator due to total internal reflection: the light is trapped (or confined) inside the resonator. The similar phenomenon also occurs with sound waves and can be observed in a number of historically famous buildings such as St. Paul's Cathedral in London or Grand Central station in New York City: if one whispers something into the wall of a circular gallery, the sound of the whisper will propagate along the circumference of the wall and can be heard by someone standing by the wall at the diametrically opposite point. Hence, the name: Whispering Gallery Modes (WGM).

These special excitations of light have very special properties and are extremely useful for various applications. Prof. Deych's research interests lie in application of these modes in biosensing, where the goal is to develop a sensor capable of detecting viruses or other biological objects. The unique ability of WGMs to detect small particles and even single molecules results from two important characteristics of these modes. First, they produce extremely narrow lines in the spectrum of light scattered from the resonators. As a result, even very small shifts of these lines can be spectrally resolved. Second, the field of these modes is concentrated in the vicinity of the resonator's surface, where it is strongly enhanced. This enhancement of the field amplifies effects of smallest changes in the environment, such as adsorption of a virus to the surface of the resonator, resulting in observable shifts of the spectral lines.

Another aspect of the Whispering Gallery Modes studied by Prof. Deych and his students is concerned with mechanical action of light. It has been well known for a long time that light can produce mechanical forces on polarizable dielectrics. Prof. Deych's research showed that confining light within WGM resonators significantly changes these forces and give them new unexpected characteristics. Prof. Deych studies how these changes can be exploited for optical manipulation of small objects and optical cooling.

A separate direction of Prof. Deych's research is concerned with optical properties of  Bragg Multiple Quantum Wells. These are periodic structures consisting of very thin (about 10 nm) layers of one semiconductor (wells) separated by wider (about 100 nm) layers of other semiconductors (barriers). When the period of such a structure is made equal to the half wavelength of light emitted by excitons confined inside wells, the structure is called Bragg structure, because the light emitted by the structure is in the resonance (called Bragg resonance) with the period of the structure. Prof. Deych and his QC colleague, Prof. Lisyansky, developed a theoretical description of optical properties of these structures. Main predictions of this theory have been observed experimentally by another QC faculty member, Prof. Menon in collaboration with Prof. Oktyabrsky of SUNY College of Nanoscale Science and Engineering. The results of this work have been published in Nature Photonics.

Full list of publications can be found here (PDF file)